They heard of a fine tract of land, about 15 miles distant, called Nutfield. After investigating the land, they determined to take up the grant. They gathered their people and their leader, the Reverend James MacGregor and met at a spot known as Horse Hill (E. Derry Rd). On the following day, April 12, 1719, Rev. MacGregor delivered the first sermon ever preached in Nutfield. The spot chosen was under a large oak on the east side of Beaver Pond. Thus, the first Presbyterian Church in New England was formally organized. Brave and faithful people pioneering the wilderness in territory now known as Derry, Londonderry, and Windham. 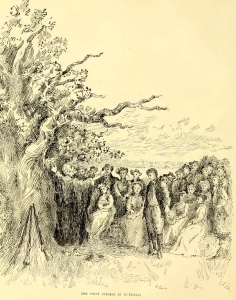