Religious freedom was the foremost reason for emigration to North America. The first settlers of this community were no different. Although, referred to as the “Scotch-Irish”, they were, by all means Scottish in tradition and manner. Presbyterians, by faith, they were forced out of Scotland in the 1600’s to Northern Ireland. They were not welcome in Catholic Ireland, but tolerated. The Revolution between King James and William of Orange (the conflict between Papal troops and Protestantism) culminated the Battle of Londonderry. Our “Scotch-Irish” ancestors were the brave defenders of the stronghold. So important did the King consider the defense of Londonderry, Ireland, that an act was passed allowing these brave people tax exempt land grants in the American Colonies. 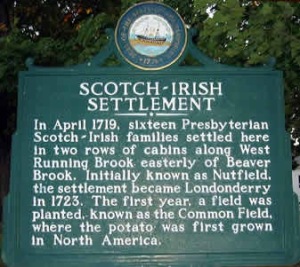 In 1718, the people embarked in five ships with their ministers, set sail and arrived in Boston August 4, 1718. Sixteen of these families sailed to Casco Bay to claim a tract of land but were frozen in the Bay by early severe sinter weather. They suffered greatly from lack of shelter and food. By Spring of 1719, the ice broke away and they journeyed to Haverhill.